THE SCIENCE OF INDOOR CYCLING TO MUSIC

"Music is like is a legal drug for athletes,” says Costas Karageorghis, Ph.D., from London’s Brunel University School of Sport and Education, one of the world’s leading authorities on music and exercise. “It can reduce the perception of effort significantly and increase endurance by as much as 15 percent. Over the past 20 years of research, Karageorghis has identified three primary things about music that could possibly influence exercise performance: 1) the tendency to move in time with synchronous sounds (e.g., tapping your toe in time with music or the beat of a drum); 2) the tendency of music to increase arousal (e.g., the desire to move rather than to sit); and 3) the tendency for music to distract the exerciser from discomfort that might be related to exercise."
I think Malonnie Kinnison, a competitive cyclist and triathlete, comes very near the truth in relating her experience in using classical music as an exercise motivator and enhancement.   As she relates to Oliver Sacks in his New York Times best selling book, Musicophilia ... Tales of Music and the Brain:

“I have been a competitive cyclist for a number of years and have always been interested in the individual time trial.  I .... found some pieces of music were particularly uplifting and inspired a high level of effort.  .... a few bars of the overture to “Orpheus in the Underworld” by Offenbach started playing in my head ... it stimulated my performance, settled my cadence at just the right tempo, and synchronized my physical efforts with my breathing.  Time collapsed.  I was in the zone, and for the first time in my life, I was sorry to see the finish line.  My time was a personal best”. -- p.242 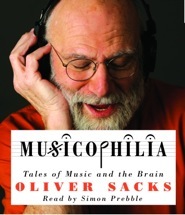 Research on the effects of music on exercise is rapidly developing science.  Generally, it is found to have a positive effect as a distraction to the sweat and toil of working out, and is a boost to performance and an enhancement to endurance -- especially if music and motion are synchonized.

Oliver Sacks, a internationally renowned neurologist, relates another piece of anecdotal evidence: his own experience in a mountain climbing accident. In Chapter 19, p 233: “Keeping Time: Rhythm and Movement” The author explained how he tore off his quadriceps tendon in his left leg while climbing alone in Norway.
In order to save his own life, he had to get himself down off the mountain by shuffling himself along, like a paraplegic in a wheel chair.  He thinks he might not have survived the repetitive drudgery of the ordeal had he not imagined in his mind “The Volga Boatman’s Song” and shuffled along to its beat.

“With synchronization of music and movement, the auditory with the motor, I could never have made my way down the mountain.  And somehow, with this internal rhythm and music, it felt much less like a grim anxious struggle. “

Furthermore, he says that during his recovery, he discovered that he had “forgotten how to walk”.  But he kept playing a piece he knew well, the Mendelssohn Violin Concerto, and “the natural rhythm and melody of walking came back to me.” On page 241, based on his medical and scientific experience,  he observes that with rhythm, “the integration of sound and movement can play a great role in coordinating and invigorating basic locomotor movement.”

With Classicalspin, I believe one can take this “coordinating and invigorating” of locomotor movements to very high levels, even the extremes of athletic performance.  Conversely, with judicious selection of music with a mind not only to tempo, but to length, form, texture, and expression, you can formulate spinning exercise routines that can achieve any short or long term fitness goal, from “recovery rides” to “race day”.

On page 236, Sacks asks a very central question: “Was it just the rhythm of beat of the music ... or was the melody, with its movement, its momentum also important” ... to his recovery?"  I've previously cited the work of Costas Karageorghis, Ph.D., from London’s Brunel University School of Sport and Education that proves that music enhances physical performance.

I believe exercising to music enhances your enjoyment of the music as well!