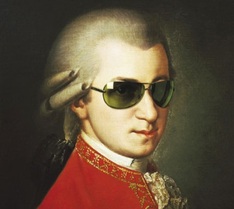 Three of Mozart’s brightest, boldest and happiest -- symphonies in C major including No. 34 "Festival", No. 36  “Linz” and No. 41 “Jupiter”?  Be fleet of foot with these, and ready for some Alpine climbing!

“Festival”  Symphony No. 34.  It's 1780, the Archbishop of Salzburg has proclaimed and grand bike race.  First stage: we slowly approach the start line as the crowd forms, and then, whoosh! we're off.  Twice around the old city, and we head along the Salzach river, before returning to the city, around the square and a blazing finish.  Second stage, we're climbing higher into the nearby Alps on the most beautiful April day imaginable.  The flowers are blooming all around in the drop-dead beautiful scenery.   Last stage, we head back to the city, running against the wind at a cadence of 80 with full effort surges.  In the middle the race gets real, colorful riders pitted against each other,  but at the end we reach the city limits, and cross the finish line with a final surge in a blaze of glory.

“Linz”   This time we’ll travel to the beautiful Austrian city of Linz, ringed by mountains still capped in snow this early spring day.  In the First Stage, a slow introduction to warm us up before a spirited run in the flats against a stiff breeze (cadence 86).  Then a Second Stage climb, higher, up the foothills of the mountains, past a spooky graveyard, the day clouding, then brightening.  We’ll take a break for dining and dancing at the Duke’s summer palace high in the hills (Third Stage) before a run back down against a VERY heavy draft up the mountain, cadence of 80 with heavy resistance.  Endurance!

“Jupiter” No, we won’t be spinning to the planet!  But this is the “biggest” of all the Mozart symphonies -- in four stages: a run with resistance, a climb, a dance, and then, if you’re up for it, a crazy final stage at a cadence of 140?  Okay, maybe 70.